The use the Amsterdam Piezo Valve in research

We perform high-precision spectroscopy in simple atomic and molecular systems for tests of quantum electro-dynamics (QED) theory. The effects of QED shift the energy levels of atoms by a small fraction. By comparing the observed transition frequency with the expected calculated value, the validity of this theory can be tested. Especially interesting is the 1S-2S transition in singly ionized helium, because it is the heavier equivalent of atomic hydrogen, which has been studied with extremely high accuracy.

Excitation of this transition requires a wavelength at 30 nm, which is not available from any laser gain medium. Therefore, we use the highly non-linear process of High-Harmonic Generation (HHG) for up-conversion. The excitation is done in a Ramsey-type experiment using pairs of amplified and up-converted frequency-comb pulses. The Ramsey-comb spectroscopy (RCS) technique was developed in our lab and performs very well in the near-IR to deep-UV spectral range [Altmann et al., Phys. Rev. Lett. 120, (2018)]. We are currently testing RCS in the vacuum-UV spectral range technique by combining it with HHG and exciting the 5pà8s transition at 110 nm in xenon.

The experimental setup is shown in Fig. 1. A beam of high-harmonics is created in a jet of argon atoms and refocused using a toroidal mirror pair. The xenon atoms are excited perpendicular to the propagation direction of the laser in a pulsed atomic beam to reduce Doppler effects. The atomic beam is created from a supersonic expansion using the Amsterdam Piezo Valve. The excited atoms are selectively ionized and detected in a TOF mass spectrometer. A series of Ramsey fringes (Fig.1) is obtained by varying the pulse delay on an atto-second time scale at different multiples of the repetition time of the frequency-comb laser. The transition frequency can be extracted with high accuracy by fitting the phase evolution of the fringes.

Description of the Amsterdam Piezo Valve

A piezo valve, which can produce cold atomic or molecular beams with short gas pulses (pulse lengths in the microsecond range) and at a high repetition rate (up to kHz level). It was developed by Maurice Janssen and Rob Kortekaas, together with the mechanical and electronic engineering groups of the Faculty of Science of the VU

The function of the Amsterdam Piezo Valve function research

The valve delivers high-density short gas pulses to generate a collimated atomic beam of xenon. The density is important, because the available power at the excitation wavelength of 110 nm is not very high, typically conversion efficiencies of <10-6 can be reached using HHG. Therefore it is of great importance to have a high-density atomic pulsed beam to increase the signal strength.

The short pulse length also reduces the gas consumption, which is a nice feature for expensive gases like xenon.

The front plate of the valve can be adjusted to change the opening diameter of the nozzle. In our experiment this is important because xenon tends to cluster when the expansion is too rapid, which depends on the size of the nozzle opening.

The accuracy of the experiment is mainly limited by the Doppler effects, because in a single photon excitation, the Doppler effects cannot be suppressed. Therefore, it is crucial to have a nicely collimated atomic beam. This requires a series of skimmers at a large distance from the nozzle of the valve and a low collision probability over this same length. The mean free path of the atoms is determined by the gas load on the vacuum, which is reduced by the short pulse duration that the valve can deliver.

The main advantage of the piezo valve in our experiment is that it delivers much shorter pulses (in the microsecond range) than most commercial valves, which are usually based on solenoids to drive the valve mechanism. The gas load and gas consumption of the piezo valve is therefore 10 times lower.

The low gas load in combination with the high-density is desirable for many experiments. Another big advantage is that it is very flexible, it can operate in pulse mode at high-repetition rate, but also in CW mode. The front plate can be adjusted to change the nozzle diameter, which is also very important for heavier gases, which tend to cluster.

Go to the productpage of Amsterdam Piezo Valve 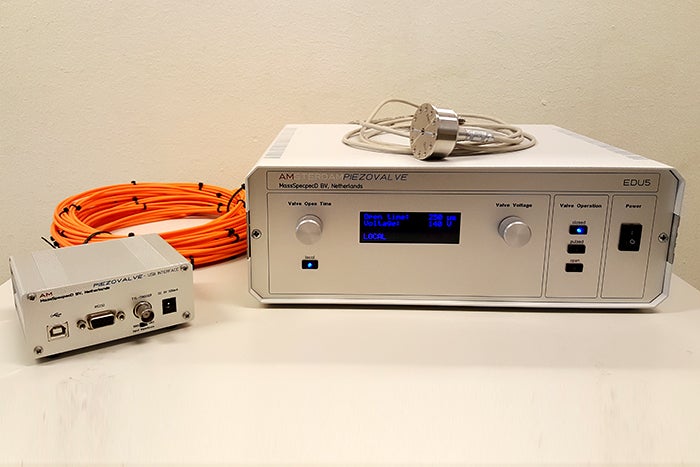 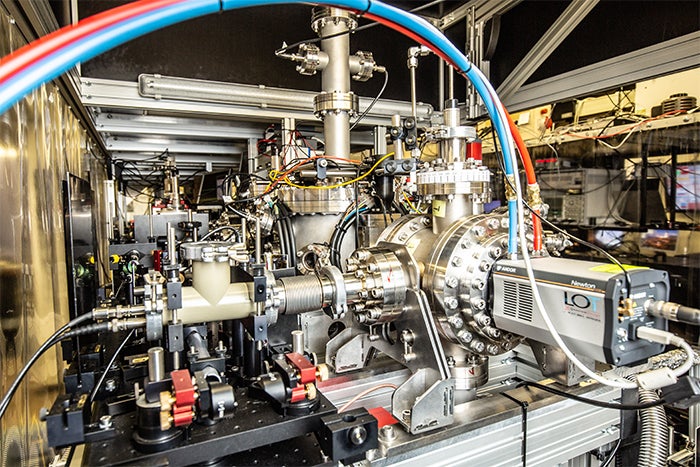 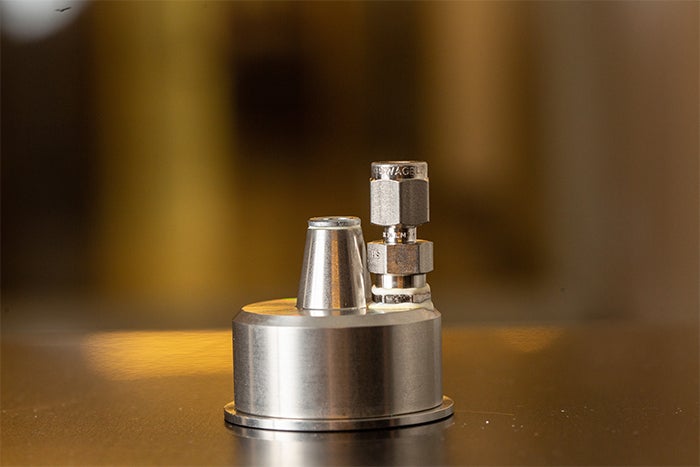 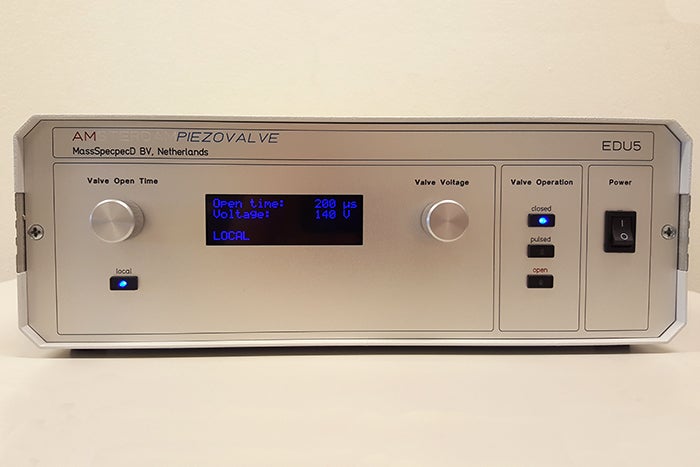 For all scientific, technical and commercial requests for further information contact:

Only for applications within VU related research projects contact: